The STEAMATIC boilers have a number of distinct advantages that include: 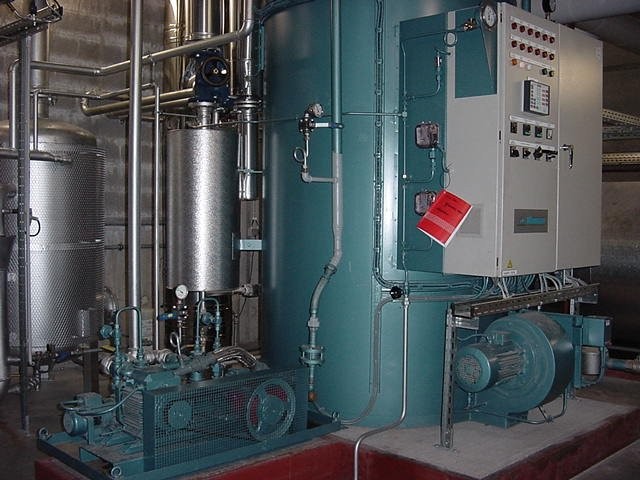 The STEAMATIC system is often supplied as a complete ” steam raising skid ” where all the necessary items are mounted on a small chassis, and
fully inter-connected. The customer need then only supply hard water, fuel, and power to the skid, and pipe out the steam and drain, vent nozzles as required. These systems can burn most normal fuels, such as diesel, paraffin, natural or LPG gas, and also heavy furnace oils in most cases.

The STEAMATIC range of locally manufactured steam boilers consist of a standard range based on steam output, ranging from 100 kg/h up to 2,500kg/h or combinations thereof. These can be supplied at standard operating pressure limits of 1000 kPa ( 10 Bar ) or up to 4000 kPa ( 40 bar ) on request. The flash-type steam boiler, due to it’s operating principle, is mainly suited to small and medium steam applications, where considerable energy and operating cost savings can be realised by using the boiler only when steam is needed. The operator simply starts the unit a few minutes prior to needing the steam, and the FULL STEAM OUTPUT and TEMPERATURE / PRESSURE is produced within 3 minutes from a COLD START. This is the major advantage of the system over traditional steam boilers. Steam is not made, as in a domestic hot water kettle, where a volume of water is brought to “boil” as such, but is GENERATED, as needed, by feeding it into the tubular heat exchanger, indirectly heated by the combustion gas.
The flash-type steam boiler is considerably more cost effective to operate, due mainly to the fuel saving in operating it only when needed, i.e. the extremely rapid steam production rate avoids the fuel wastage in “getting up to temperature” on a traditional boiler. Costs are also saved on water treatment as these systems seldom require chemical water treatment, as there is NO WATER LEVEL inside the unit at any one time. The units simply require softened “demin” water in normal urban applications via simple water softener. The flash-type steam boiler also has a high thermal efficiency due to its interior 4 air pass gas circuit – further reducing the operating costs. Due to the lack of water volume inside the unit during operation, the flash-type steam boiler is considerably safer to operate, than traditional type boilers. The flash-boiler is offered complete with its combustion and control / safety equipment. The systems can also be provided with ancillary equipment and accessories, where needed. These are, as example, the feed water tank or hot-well, the water softening units, blow down tank, steam separator etc.